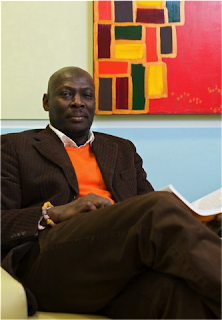 Lecture Postcolonialism and the Diasporic Imaginary

While the two fields of Postcolonial and Diaspora Studies overlap in interests and even methods, it is very rare that they are actually brought into serious conversation. Prof. Quayson’s lecture will demonstrate, first, that this impasse is due to the fact that while Postcolonial Studies is dominated by the epochal relation of the nation-state (its colonial formation, its post-colonial anxieties, and the manner of its uneven insertion into transnational and global realities), Diaspora Studies has been concerned primarily with the experience of spatial discontinuities in various guises (multiple and simultaneous identification with the homeland and hostnation, the unheimlich of home, post-memories of exile, etc.). Prof. Quayson will then proceed to illustrate the differences between the two fields with reference to methodological nationalism and the diasporic imaginary, elaborating its three essential components of place, nostalgia, and genealogical accounting.

Together with the lecture, Ato Quayson will also be teaching a masterclass for advanced MA and PhD students on Literary spaces and Spatial Theories in Postcolonial Literature. The masterclass will take place on Friday, 4 October 2013 (16.00-18.30 at Utrecht University). For more information, please email: OSL-fgw@uva.nl

Prof. Quayson has published widely on African literature, postcolonial studies and in literary theory. His book publications include the
Blackwell Companion to Diaspora and Transnationalism Studies, ed.with Girish Daswani (in press, New York: Blackwell, 2013); The Cambridge History of Postcolonial Literature, ed., 2 volumes. (Cambridge University Press, 2012); Labour Migration, Human Trafficking and Multinational Corporations (with Antonela Arhin; New York: Routledge, 2012); Fathers and Daughters: An Anthology of Exploration, ed., (Oxford: Ayebia Publishers, 2008); Aesthetic Nervousness: Disability and the Crisis of Representation (New York: Columbia University Press, 2007); African Literature: An Anthology of Theory and Criticism (with Tejumola Olaniyan; Oxford: Blackwell, 2007); Relocating Postcolonialism (with David Theo Goldberg; Oxford: Blackwell, 2002).
He also wrote the Introduction and Notes to the Penguin Classics edition of Nelson Mandela's No Easy Walk to Freedom (London: Penguin, 2002) and is General Editor of the Cambridge Journal of Postcolonial Literary Inquiry. Prof. Quayson has just completed a book on the urban history of Accra told from the perspective from a single street, forthcoming with Duke University Press under the title of Oxford St., Accra; Urban Evolution, Street Life and Itineraries of the Transnational (in press, 2014).

The lecture is part of the lecture series New Directions in Literary Postcolonial Studies, organized by Birgit M. Kaiser and Emmanuelle Radar with the Postcolonial Studies Initiative PCI and the Center for the Humanities (Utrecht University), together with the Research Institute for History and Culture OGC, and the Netherlands Research School for Literary Studies OSL.

Earlier speakers in the series were Emily Apter (NYU) in June 2011 and Réda Bensmaïa (Brown) in October 2012.

The masterclass for advanced MA students and PhD students will look into the general intersections between Spatial Theory and Literary Space with special emphasis on postcolonial literature. Ato Quayson has just completed a book on the urban history of Accra told from the perspective from a single street for Duke UP (forthcoming), coming out of his work on how to apply spatial theory (such as Henri Lefebre’s The Production of Space) to the understanding of space in literature. Prof. Quayson has been approaching the question with a focus that is more literary critical than sociological, thus less interested in questions of marketing, the global market place of judgement, etc. and primarily concerned with how we detect and describe space when we see it as either a thematic or a description in literature.

The background readings for the masterclass are:
Quayson, Ato. 2012a. “Introduction: Postcolonial Literature in a Changing Historical Frame.” In The Cambridge History of Postcolonial Literature, Vol. 1., edited by Ato Quayson, 1-29. Cambridge; Cambridge University Press.
Quayson, Ato. 2012b. “Periods vrs Concepts: Space Making and the Question of Postcolonial Literary History.” PMLA, 127(2): 349-356.
Lefebre, Henri, Chapters 1 and 2 of Rhythmanalysis: Space, Time, and Everyday Life. New York: Continuum International, 2004.
Bakhtin, Mikhail. 1986. “The Bildungsroman and its Significance in the History of Realism”, in Speech Genres and Other Late Essays. Austin: University of Texas Press, 10-59.
Moretti, Franco. 1987. “Bildungsroman and Symbolic Form,” in The Way of the World: The Bildungsroman in European Culture, London: Verso, 3-13.

In order to register for the masterclass, please email: OSL-fgw@uva.nl