On Ethics of Imperfection:
Practices of Self and Becoming Common 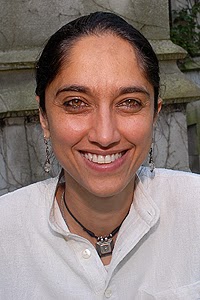 abstract:
My work deals with the history of transnational lifestyles and modes of self-work that counter aggressive cultures of globalization, forged by war, empire and capital. These askeses or spiritual exercises constitute a minor and intimate style of being global, and involve dissident practices of gender, sexuality, prayer and art. They often take the form of a moral imperfectionism—making oneself less rather than more—and may well comprise the lost content of radical democratic thought and a key to its future elaboration.
My lecture will approach this enterprise through a meditation upon the poetic encounter between the Indian anti-colonial leader M.K. Gandhi and the Portuguese poet Fernando Pessoa, in the troubled era of the early twentieth century. Supplementary readings, drawn from my books, Affective Communities (2006) and The Common Cause (2014) will highlight queer practices of self-reduction and minor globality as germane to the ethical content of democracy and for the enterprise of becoming-common.

Leela Gandhi (born 1966) is Professor of English at Brown University and a noted academic in the field of postcolonial theory. She is the co-editor of the academic journal Postcolonial Studies, the author of the summary text Postcolonial Theory: A Critical Introduction (Columbia UP, 1998), Affective Communities: Anticolonial Thought, Fin-de-Siècle Radicalism, and The Politics of Friendship (Duke UP, 2006), The Common Cause. Postcolonial Ethics and the Practice of Democracy, 1900-1955 (Chicago UP, 2014). She serves on the editorial board of the electronic journal, Postcolonial Text