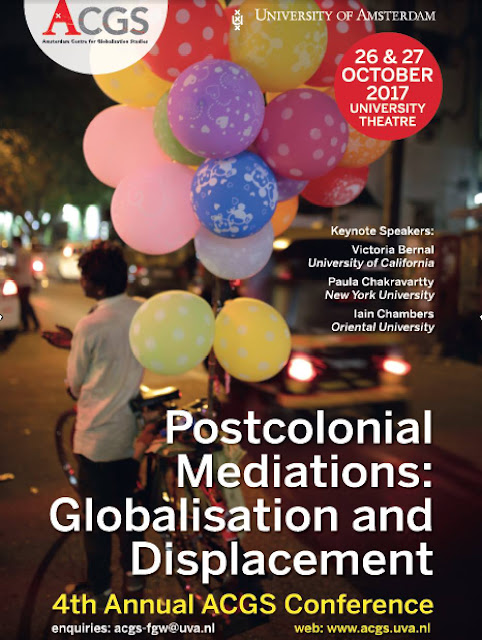 Displacement can be seen under the rubric of mobility and its many forms today, most tellingly discernible in the forced movements of peoples in the wake of wars, and the concomitant crises this provokes around issues of “culture and civilization”, and its gendered, religious and raced dimensions. The refugee crisis in Europe is an important case in point. Cultural productions from the non-West continue to displace received understandings of other cultures and societies (Chow, 2002, Narayan, 1997) while contemporary political movements draw inspiration from postcolonial struggles as they deploy new media forms, as Howard Caygill (2013) has recently shown in his analyses of the Gandhian non-violence movement, the continuing Maoist rebellions and their relation to the Zapatistas and the Indignados. The shifting contours of gender and sexual politics, and the critique of stable identities provoked by queer politics and theory, are also producing displacements, in the discourse and practice of the politics of rights. Local, regional and national politics often challenge universal rights claims. e.g. the controversies around the relevance of “Global Queer” (Altman, 1996).

The postcolonial is understood here simultaneously as a mediating and a displacing series of interventions, which demands engagement with contemporary understandings of globalisation.

for more information about the programme see here: 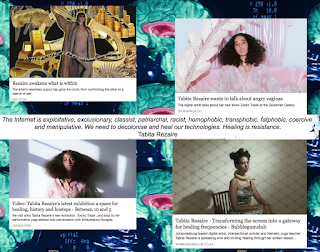 In this PCI screening/talk on October 5 we have the great honor and privilege to have with us the artist Tabita Rezaire, who will introduce, show and discuss her video work for an hour, followed by a 30 minutes Q&A session. We end with drinks.

This event is co-organized by Koen Leurs and Domitilla Olivieri from the Graduate Gender Programme / Netherlands Research School ofGender Studies with Michiel De Lange from the New Media & Digital culture Program, under heading of the the Postcolonial Studies Initiative and Co.laborations, the Expertise Centre of Utrecht University's Department of Media and Culture, and in dialogue with the Impakt festival.

Kindly RSVP to this Facebook event to let us know you are coming.

Biography
Tabita Rezaire (b.1989, Paris) is a French - of Guyanese and Danish descent - video artist, health-tech-politics practitioner and Kemetic/ Kundalini Yoga teacher based in Johannesburg. She holds a Bachelor in Economics (Paris) and a Master in Artist Moving Image from Central Saint Martins College (London). Rezaire’s practices unearth the possibilities of decolonial healing through the politics of technology. Navigating architectures of power - online and offline - her work tackles the pervasive matrix of coloniality and its affects on identity, technology, sexuality, health and spirituality. Through screen interfaces, her digital healing activism offers substitute readings to dominant narratives decentering occidental authority, while her energy streams remind us to resist, (re)connect, and remember.

Rezaire is a founding member of the artist group NTU, half of the duo Malaxa, and mother of the energy house SENEB. In 2017, she presented her first solo show Exotic Trade at the Goodman Gallery in Johannesburg. Artsy declared her among the ‘emerging artists to watch for in 2017’, Artnet among the ‘international Black artists of 2016’, and True Africa amid the ‘top opinion makers of the African continent in 2015’. Rezaire has shown her work internationally – V&A London, National Gallery of Denmark, Berlin Biennale, Tate Modern London, Museum of Modern Art Paris, MoCADA NY, The Broad LA and presented her work on numerous panels – Het Nieuwe Institut Rotterdam, Royal Academy The Hague, Kunsthalle Bern, National Gallery Harare, Cairotronica Cairo, Fakugezi Digital Art Africa Johannesburg. She has curated screenings at the Institute of Contemporary Art London, led spiritual technology workshops worldwide and has her writing published by Intellect books.
In 2016, Tabita was a resident at the Utrecht Impakt festival, see http://impakt.nl/headquarters/resident-artist-tabita-rezaire/

Professor Roderick A. Ferguson and Dr. Rahul Rao in a Doing Gender and PCI Lecture Series

Doing Gender and PCI Lecture on ‘The Return of Marxism in Queer Theory: Queer of Color Perspectives’
Utrecht University
May 18, 2017
Roderick A. Ferguson (University of Illinois at Chicago, USA): ‘Queer of Color Critique and the Engagement with Western Marxism’

Rahul Rao (SOAS University London, UK): ‘Queer in the Time of Homocapitalism’
In recent years, leading institutions of global capitalism have begun to take activist stances against homophobia. For example, in response to Uganda’s passage of an Anti Homosexuality Act, the World Bank withheld a $90 million loan that was due to have been disbursed to the country. Like a number of multinational corporations, the Bank has also become invested in quantifying the “economic cost” of homophobia so as to make a “business case” for LGBT rights. Why have these institutions begun to inveigh against homophobia and why have they done so now? What are the terms on which the figure of the queer has come to be embraced as an object of concern by the global development industry and as a potential “stakeholder” by the business world? What understandings of “homophobia” underpin the putative “business case” against it? In addressing these questions, I shall attempt to offer a political economy of “homophobia” as it expresses itself in contemporary Uganda; in doing so, I hope to make visible the implication of the Bank in the production of the very affects that it now purports to oppose.

More information here.
Posted by at 6:13 AM 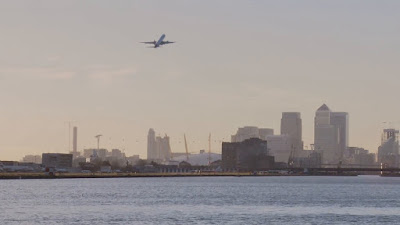 The Postcolonial Studies Initiative continues its 7th film series in 2017 with a selection of films, shown monthly, that draw on a variety of different contexts in our postcolonial world. The series is organized annually and invites all interested in our European postcolonial present and the representation of its political, cultural and aesthetic realities and challenges.

Everyday Borders film will be introduced briefly by Leila Whitley (Marie Curie Postdoctoral Fellow, Zukunftskolleg, University of Konstanz, Germany). Everyday Borders is joint project of The University of East London’s Centre for Research on Migration, Refugees and Belonging and activist organisations based in London (Southall Black Sisters, Migrant Rights Network, and the Refugee and Migrant Forum of Essex and London), this documentary examines the UK’s Immigration Act of 2014 and the experience of everyday bordering.

Everyday Borders traces the effects of legislation shifts which increasingly institute immigration checks and controls throughout the space of everyday life. As Nira Yuval-Davis explains in the film, these shifts are “threatening to destroy the conviviality of pluralist metropolitan London, and multi-cultural Britain in general.” The documentary is a piece of public scholarship, which combines an activist orientation with analysis of shifts in UK immigration policy from academics working in the UK.

This symposium is set up using student feedback on the Postcolonial Studies Initiative survey where we asked students to write down the topics, speakers and theoretical content they are missing or would like to see addressed in Academia. Results show that students want more diversity of speakers and broaden academic traditions and mainstream canons. Moreover, students would like to know more about initiatives in their community and how to exercise their academic expertise in a practical way.

With this valuable input, we are organizing a symposium where students can engage with local student initiatives from a postcolonial perspective, network, socialize and attend workshops. First of all, there will be a marketplace where students can gain/ask for more information about local student actions. Secondly, the day will consist of speakers from different communities in Utrecht with student panel discussions aiming at exercising the practicality of their academic knowledge/skills. Thirdly, students can sign up for two workshops where there is an opportunity to go more in depth on specific postcolonial themes in the Dutch context, with the guidance of young student professionals.

Proudly we would like to introduce the power ladies speaking at the Creating Spaces: Student Symposium: Pravini Baboeram musician & activist involved with the International Institute for Scientific Research and volunteer at the Sarnámihuis. Patricia Kaersenhout visual artist, activist, and womanist. Sayonara Stutgard organizer of the Feminist Open Mic in Utrecht and hosts two book clubs: It's LIT YA & and a Postcolonial Book Club Aphra's Book Club. Alfie Vanwyngarden the Queen of Bonaire, afro feminist, freedom fighter and RMA Media Studies student. Furthermore, there will be performances and lectures by Decolonial artist; Patricia Kaersenhout, Sarnámihuis member & Echo: center of expertise for diversity policy program manager; Pravini Baboeram-Mahes, and many others.

This symposium is for students by students and aims at creating a comfortable space for students to come together and discuss diverse affirmative actions in their communities where a diversity in perspectives and approaches is valued.

In this internationally prize-winning documentary, which focuses on the refugee crisis, Gianfranco Rosi contrasts the lives of the desperate migrants landing on the shores of Lampedusa with the everyday existence of the locals. Using mainly fixed camera positions and no narrative voiceover, Gianfranco Rosi enigmatically juxtaposes scenes, switching between the migrants’ daily, desperate arrivals, and the everyday existence of one Lampedusa family: and one young boy in particular, Samuele, whose solitary meandering through the beautiful rugged island, making naught slingshots, creates a strong contrast between his carefree childhood and the harsh realities of the refugees.

Samuele has a lazy eye that doctors are treating with the old-fashioned method of blanking out one lens for the good eye. This becomes a metaphor for the lazy eyes of Europe, or for the EU desire to look away. Though his camera work Rosi forces us to look at and focus on the tragedy that continues to unfold in the Mediterranean. Samuele is also suffering from hyperventilation and anxiety, and is treated by the same island doctor, dr. Bartolo, who has to attend to the migrants for many years and continue to carry out autopsies on their wretched corpses. He is the one of the few explicit points of contact between the migrants’ story and Samuele, one hint of a symptom, or a larger malaise.