Title: “Outsourcing Patriarchy: National anxieties, Transnational mediations”
Time: 16.00-18.00
Place: Domplein 4, Marnixzaal (Utrechts Centrum voor de Kunsten)
Synopsis: My paper concerns the recent uses of the term "honor killing" in the newspapers in India. I examine how and why such a term emerges in the context of transnational media in India and the implications of this for feminist media research.

Professor Inderpal Grewal is Professor of Women’s, Gender, and Sexuality Studies at Yale University. She is the author of among others Home and Harem: Nation, Gender, Empire and the Cultures of Travel (1996) and  has written and edited (with Caren Kaplan) Gender in a Transnational World: Introduction to Women’s Studies (2001, 2005) and Scattered Hegemonies: Postmodernity and Transnational: Feminist Practices (1994). Currently she is working on a book length project on the relation between feminist practices and security discourses. 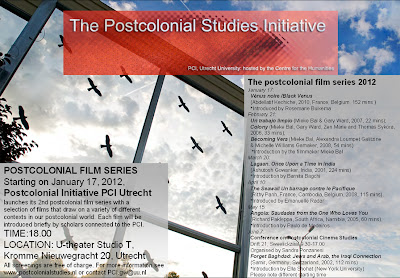 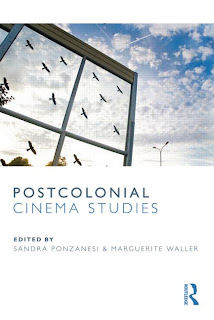 This collection of essays foregrounds the work of filmmakers in theorizing and comparing postcolonial conditions, recasting debates in both cinema and postcolonial studies. Postcolonial cinema is presented, not as a rigid category, but as an optic through which to address questions of postcolonial historiography, geography, subjectivity, and epistemology.
Current circumstances of migration and immigration, militarization, economic exploitation, racial and religious conflict, enactments of citizenship, and cultural self-representation have deep roots in colonial/postcolonial/neocolonial histories. Contributors deeply engage the tense asymmetries bequeathed to the contemporary world by the multiple,diverse, and overlapping histories of European, Soviet, U.S., and multi-national imperial ventures. With interdisciplinary expertise, they discover and explore the conceptual temporalities and spatialities of postcoloniality, with an emphasis on the politics of form, the ‘postcolonial aesthetics’ through which filmmakers challenge themselves and their viewers to move beyond national and imperial imaginaries.

"Postcolonial Cinema Studies will be a major contribution to postcolonial research and cinematic scholarship and is on the "leading edge" of its field." Dr Imogen Tyler, Lancaster University, UK

"Postcolonial Cinema Studies argues that current experiences of migration, economic exploitation, militarization, racial and religious conflicts, and tensions between citizens and non-citizens are haunted by colonial and neocolonial histories globally. Impressive in its scope and its attention to diverse cinematic dimensions, the book is an important intervention in cinema and postcolonial studies." Katarzyna Marciniak, Ohio University, USA

"This book is a significant contribution to the study of postcolonial cinema and beyond. Global in scope yet thorough in its rigorous investigation of specific case studies of national, transnational and glocal cinemas, this book will probably be considered one of the definitive texts on postcolonial cinema for many years to come." Yosefa Loshitzky, University of East London, UK

"Postcolonial Cinema Studies is an essential book that orchestrates an enriching dialogue between postcolonial studies and cinema studies, in ways that mutually illuminate both fields. Interdisciplinary and transnational, the volume goes beyond the usual Anglo-phone boundaries. Not only does it stretch the corpus of films to be studied, it also productively counterpoints theories, methodologies, and regions." Ella Shohat, New York University, USA and Robert Stam, Tisch School of the Arts, USA

Sandra Ponzanesi is Associate Professor of Gender and Postcolonial Critique, department of Media and Culture Studies/Gender Programme at Utrecht University, the Netherlands. Among her publications are Paradoxes of Post-colonial Culture (2004), Migrant Cartographies (2005) and Deconstructing Europe: Postcolonial Perspectives (Routledge, 2011).

Marguerite Waller is Professor of Women's Studies and Comparative Literature at the University of California, Riverside. Among her publications are Frontline Feminisms (Routledge, 2001), Federico Fellini (2002), Dialogue and Difference: Feminisms Challenge Globalization (2005), and The Wages of Empire (2007). 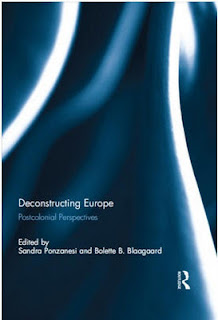 
This book engages with the question of what makes Europe postcolonial and how memory, whiteness and religion figure in representations and manifestations of European ‘identity’ and self-perception. To deconstruct Europe is necessary as its definition is now contested more than ever, both internally (through the proliferation of ethnic, religious, regional differences) and externally (Europe expanding its boundaries but closing its borders).
This edited volume explores a number of theoretical discussions on the meaning of Europe and proposes analyzing some of the deeds committed, both today and in the past, in the name of Europe by foregrounding a postcolonial approach. To deconstruct Europe as a postcolonial place does not imply that Europe’s imperial past is over, but on the contrary that Europe’s idea of self, and of its polity, is still struggling with the continuing hold of colonialist and imperialist attitudes. The objective of this volume is to account for historical legacies which have been denied, forgotten or silenced, such as the histories of minor and peripheral colonialisms (Nordic colonialisms or Austrian, Spanish and Italian colonialism) and to account for the realities of geographical margins within Europe, such as the Mediterranean and the Eastern border while tracing alternative models for solidarity and conviviality. The chapters deal with social and political formations as well as cultural and artistic practices drawing from different disciplinary backgrounds and methodological traditions. As such it creates an innovative space for comparative and cross-disciplinary exchanges.

Sandra Ponzanesi is Associate Professor of Gender and Postcolonial Critique in the Department of Media and Culture Studies/Gender Programme at Utrecht University, the Netherlands. Among her publications are Paradoxes of Postcolonial Culture (2004), Migrant Cartographies (2005) and Postcolonial Cinema Studies (2011).

Bolette B. Blaagaard is Research fellow at the Centre for Law, Justice and Journalism at City University London, UK. She has published articles and contributed to edited volumes on issues of Nordic colonialism and whiteness in the Nordic region as well as the ethics of journalistic practices, objectivity and freedom of speech. 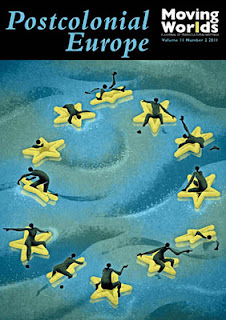 The papers included in the issue were presented at the Leeds workshop ‘Europe and the Rest. A Dialogue between Etienne Balibar and Zygmunt Bauman’ (May, 2009) and Utrecht conference on the ‘Idea of Europe. Occidentalism, Orientalism, and the idea of a Postcolonial Europe’ (October, 2009).
Volume 11 Issue 2 2011
Contents
EDITORIAL
GRAHAM HUGGAN 1
ARTICLES
ZYGMUNT BAUMAN, The Triple Challenge 7
ÉTIENNE BALIBAR, Ideas of Europe: Civilization and Constitution 12
PAUL GILROY, Shameful History: The Social Life of Races and
the Postcolonial Archive 19
SIMON GLENDINNING, ‘Europe, for example’ 35
LUISA PASSERINI, The Ethics of European Memory: What is to be Done? 48
MAX SILVERMAN, Hybrid Memory in the City 57
SANDRA PONZANESI, Europe Adrift: Rethinking Borders, Bodies, and
Citizenship from the Mediterranean 67
CORDULA LEMKE, Contesting Europe, Provincializing the World 77
MARGARET FETZER, Beyond the Textual Line: Walter Scott’s Postponing and
Post-scripting of ‘Authentic’ Scottishness 86
PAULO DE MEDEIROS, A Failure of the Imagination? Questions for a
Post-imperial Europe 91
JOHN MCLEOD, No End to Europe? Connecting Caledonias
in the South Pacific 102
REVIEWS
by WERNMEIYONG ADE, CLAIRE CHAMBERS, NATALIE DIEBSCHLAG 111

Because of the disjunctive and unstable interplay of commerce, media, national policies, and consumer fantasies, ethnicity, once a genie contained in the bottle of some sort of locality (however large), has now become a global force, forever slipping in and through the cracks between states and borders – Appadurai 1996, p. 41, Modernity at Large


The rapid development of digital technologies has radically transformed ways of keeping in touch with home cultures and diasporic networks. Moreover, the notion of migration has undergone significant shifts, coming to signify imaginaries on the move which are not necessarily linked to geographical displacement. The aim of this conference is to address the relationship between migration and digital technologies across national contexts and ethnic belonging. Migrancy embeds many of the local and global paradoxes that also pertain to digital media with their compression of space and time. However, the link between the two fields is still under-theorized and in need of more situated and comparative analysis. Drawing from approaches from the humanities and social sciences (media theory, communication studies, learning sciences, gender studies, cultural studies, postcolonial theory, migration and transnational studies, among others), the primary aim of this conference is to explore how the study of digitalization and migration challenges existing notions of diaspora, identity, nation, family, learning, literacy, social networks, youth, body, gender and ethnicity, asking for new approaches and a rethinking of traditional social and cultural categories.

For full call for papers and more information go to: http://www.digitalcrossroads.nl/
Posted by at 2:04 AM